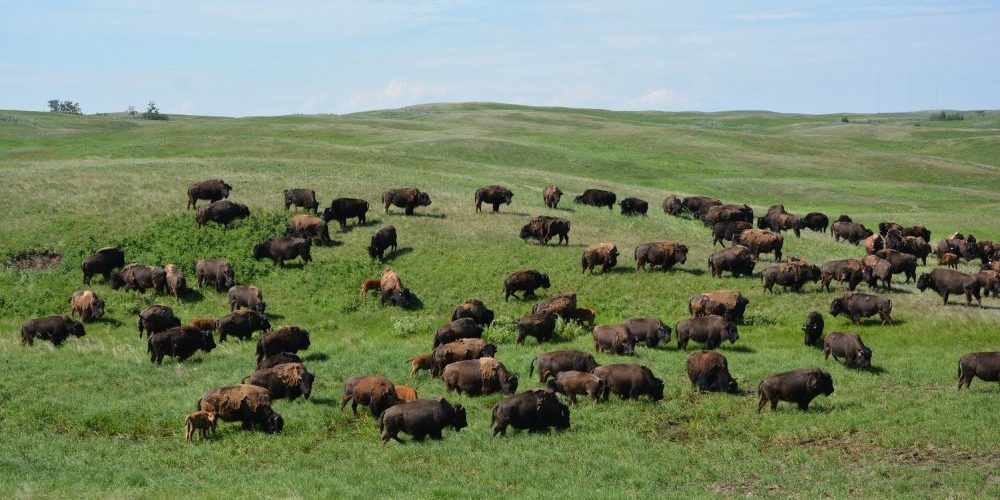 Canada’s prairie grasslands are among the most endangered ecosystems in the world. Raising bison in their natural habitat will help to preserve this precious resource for generations to come. This post, originally published on Ducks Unlimited Canada’s website talks about how ranchers and DUC work together to conserve native prairie grassland and bring bison back at the Shell Buffalo Hills Conservation Ranch.

In 2013, DUC—in partnership with Shell—purchased the 6,238 acre (2,524 hectare) ranch to conserve the native grassland habitat and wetland basins. Despite its protected habitat status, the land—along with adjoining crown land—serves as a working ranch. Randle owns or has under lease 13,400 acres (5,423 hectares), which includes four sections (2,560 acres) of the Shell Buffalo Hills Conservation Ranch on which he runs the bison and 1,000 head of cattle on the crown land. Randle’s lease with DUC is a perfect example of partnership that bodes well for the future of the area says Ashley Rawluk, DUC conservation programs specialist.

Also important to note, says Rawluk, is that much of the ranch is unbroken native Prairie, a threatened ecosystem in the prairies. The Shell Buffalo Hills Conservation Ranch has some 4,130 acres (1,671 hectares) of native fescue grasslands, in addition to areas of tame hay land.

About 800 natural wetland basins dot the landscape across Shell Buffalo Hills Conservation Ranch. That, along with native grasslands, makes it a natural fit for bison and cattle.

Randle signed two separate leases with DUC. Under one, the bison roam the north half of the ranch. With the other, Randle’s yearling cattle are haying and grazing on the south part of the ranch.

Coast to coast, our customers know there's more to

Who wants some tasty Bison and Barley Soup for din

Hello 2023! Who wants to WIN some NOBLE PREMIUM BI

New year, new recipes! And this bison biriyani is

Bison burgers are one of the easiest ways to eat h

Bison is the Best Meat to Eat and Save the Planet

The Journey to Building a Brand

The journey to building a brand always starts at the same place—with a dream. A …

Showcasing bison to Chefs at SIAL

Bison Conservation: Hope for the Future

With Wes Olson, everything begins and ends with a story. “They annoyed me,” Wes said, …